We are located on high street behind Peyton's place dog grooming, just take the driveway up and park along the west side of the building. 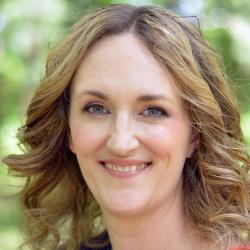 Brenda graduated in 1997 holding a Master of Physical Therapy degree from The Texas Tech University Health Sciences Center.  She began her journey with John F Barnes' Myofascial Release in 2002, became a Licensed Massage Therapist in 2007, and opened Monarch Physical Therapy in 2011.

Brenda grew up on a ranch in Fredericksburg that has been in the family since 1851. She understands what it is like to grow up and live in a small town where everyone is a relative. She loves getting to sit outside and look at the stars, play with the dogs in the back yard, or get her large extended family together to eat. She is married to AJ Garza, and they have 3 dogs, Angus, Piper, and Rascal.